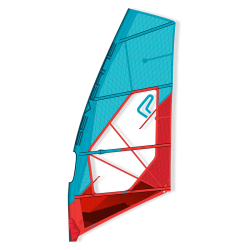 So it’s that time again when we get all excited about the new kit we will be using for the new season. This year is a BIG year for me as I have decided to change both my sails from Severne S-1 Pro’s to Blade Pro’s for 2017. On top of that I’m changing my board brand from 8 years of sailing Fanatic to NEW horizons using Starboard Kode.

Why change my sails??…… Well, it’s no more complicated than we don’t have a Team Rider using Blade sails. I used Blade’s from 2006 – 2014 before changing to S-1’s and so the change back I hoped would be relatively easy, although it will take a very good sail to beat the dynamics of the Severne S-1 Pro. 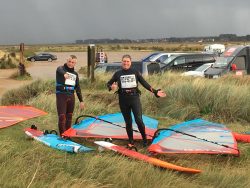 The Severne Blade is a 5 batten sail designed for wave/all round use and it’s gone through 11 years of evolution to get to the 2017 model. It benefits from the ‘high Tech’ materials Ben Severne is renowned for. The build quality looks great with EM3 and SpiderFibre featuring well. I love the dual colour scheme which is both simple but has great presence on the water……. and it matches my Severne NuEvo Carbon board!!

You expect nothing less than the best with the Blade – its fabrics are beyond any other manufacturer. The EM3 is used on the higher panels saving weight and the use of  SpiderFibre distributes the stresses through the sail efficiently reducing even more weight. The Aramid luff strip lives on which ensures the sail doesn’t stretch over time. X-Ply throughout the window keeps the high level of quality in this benchmark wave sail.

The 2017 Blade is a sharp feeling sail – power comes on and off quickly and pulls a little more from the front.  This comes from a Dacron luff panel which aids delivering maximum power right from the get go. The 5 batten configuration gives the Blade a wider wind range than S-1 and a more ‘locked in’ feel also yet the stability is 100{f61be24ee1963f108502a136e2efcacf7d807c138d3e8d7bbcfb0982c2ecffb4}. I certainly noticed its start off power is delivered faster than the S-1 but I wouldn’t say that overall the Blade is a more powerful sail than the S-1.

I’m still bedding into the Blade’s charms but the bottom end grunt it gives you is a nice surprise. The speed at which it powers up in the waves may not suit the ‘wave slashers’ who will prefer the less punchy feel of the S-1. The quality of the fabrics and fittings are absolutely ‘on point’ and it works well with single and multi-fin setups. The Severne Blade certainly doesn’t feel a compromise to the Blade Pro Series sails. If I were to dare to use numerics to rate the sail – Well it’s a 9/10 from me…….