Another day in winter paradise….. 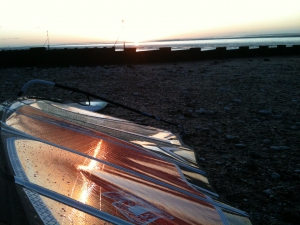 So the Team QSW riders braved the winter conditions to get yet another sail in over the Christmas period. Neil and Andy hooked up at Hunstanton to try out their NEW 2012 Severne sails – Andy on his 2012 S1’s, and Neil and his 2012 Blades. “We sailed all day from 12.00pm – darkness and had a great sail. The conditions were 5.0mtr weather but build to 4.5mtr weather by the end of the session” 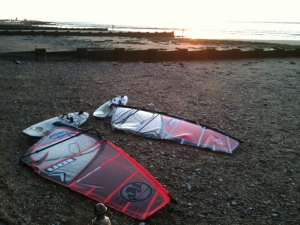 Neil rigged his 5.3mtr Blade to start with matched with a Fanatic Freewave Textreme 85, but after an hour came in and changed down to a Blade 4.7 and changed the 25cm fin in the board to a 23cm fin. ” I went out on the 5.3 Blade to begin with and found it very well powered but remarkably stable. The problem was that as the wind built the board felt over fin’d and wanted to dance a little in the big gusts.  The sail was massively over powered with Andy on a 4.5mtr S1. I came in and changed down to a 4.7 Blade and a smaller fin.”

” The second session was a revelation with the 4.7 Blade feeling much more maneuverable and the board feeling settled and confident in transitions. The shorter clew on the sub 5.3mtr Blades means for far better maneuverability with the sail and razor sharp feel when fully powered.” Neil said. 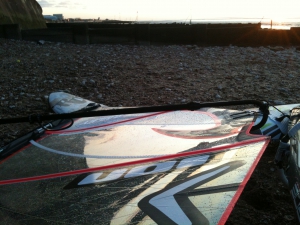 Andy on the other hand was trying his 2012 S1 sails with his RRd Freestyle twin. He rigged a 4.5 S1 which served him very well with the varying wind strengths from 20 – 30 knots. ” It was a very big tide so at low tide when we sailed the water would go a long way out. The 2012 S1 is really a trimmed up version of my sensational 2011 S1’s. A little more powerful, but yet still super maneuverable and light in the hand. I have used these sails from my old Gaastra sails and am still amazed just how much lighter they are to play with. I also find I can rig a size smaller than when I had my Gaastra’s which makes Freestyle easier.” said Andy.

And to add to the unique nature of the 2011 Christmas period – Andy and I found a massive Eel washed up on the beach. It must have been 5ft long with a 18″ girth. Looking up info on the web, I actually wonder that this particular one could be one of the biggest found in the UK??