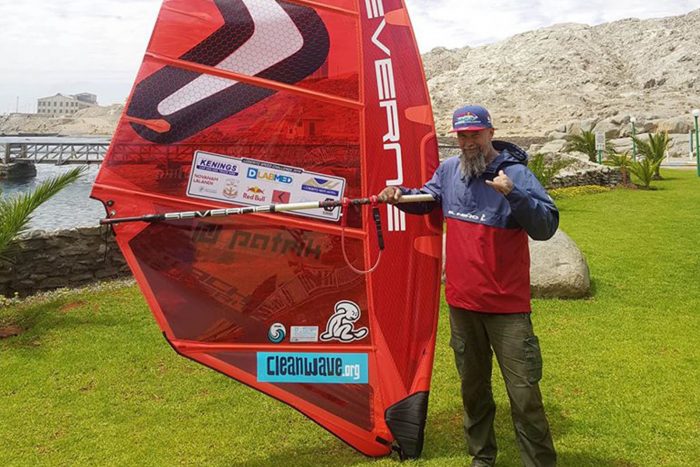 The Luderitz Speed Challenge in Namibia is still at full swing and after some recent nuking windy days, nearly all of the riders using our Mach3 speed sails have broken their national record!

Despite the improvement of the German record, Gunnar was aiming for the world record. Here is what he said about the recent windy day: “Not a good day for me. I felt really weak on the day and couldn’t show my top speeds. The wind was good sometimes, but you needed to be lucky to get a strong gust all the way down the canal. My fin pressure was always dying  100m in front of the finish due to a big hole. I ended up the day with a massive crash where I destroyed all my gear with almost 100kmh. I also twisted my foot, which spelled a few days off for me but I’ll be back on top for the next one.“

Twan reports from the Luderitz Speed Challenge: “Sunday already started with lots of wind, and around 2 pm it picked up big time with gusts of 60/65kn coming through. Although it was super windy the angle was only okay for good speeds for about 20 minutes. All of the fastest speeds were done in this time window. I used the 5.2 Mach3 speed with a 40cm AV boards speed with a 19cm fin. I improved the Dutch record to 52.49 on 500m and peaked 55.9 knots. The new Mach3 Speed sails are working amazing and the conditions were not easy. It was bumpy and a bit too broad on the run.“

PEP BONET IMPROVES THE SPANISH RECORD WITH A 50.88 KNOT RUN

Spanish rider Pep Bonet was among the guys taking a new record on the new Mach3 speed sails. He had this to say about his record-breaking day: “Super happy to have set again a new Spanish Speed record! It happened yesterday on a light wind day, I was on the Severne 5,5 and the new Patrik 37 with a new record of 50,88 knots average speed on 500 meters, still under the ratification of WSSRC.“