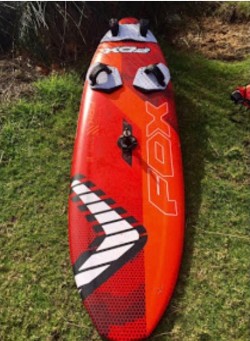 The last two year has seen Ben Severne branch out into areas of windsurf kit other than sail hardware. First we had the Severne NuEvo range of Twin fin wave boards, re-mastered from the Starboard Evo and made much better by way of bigger and re-shaped twin fin configuration. Then Severne started on harness lines and harness’s with the Air, Lux and excellent harness line range.

Well now Severne have listened to our comments and designed this fantastic Fox freeride board. I saw it a few months ago but was sworn to secrecy but we can now let you guys know after seeing it posted on social media by a Severne Team Rider. The 105Ltr board is all about easy gybing and fast controllable blasting. Firstly – once again the guys at Severne (Milky to be exact! – Yes thats his name and he’s British) has smashed it with the graphics. The board when it comes to production October 2016 may be altered to have a single rear strap option but other than that its how you see it. There may be others in the line up but for now its about seeing the reaction to this board. Prices are not released but expect it to be circa £1500-1700.

We will be having one come to try so start an orderly queue here to get your name on the list to try what we are sure will be a popular Severne sailor choice in 2017.