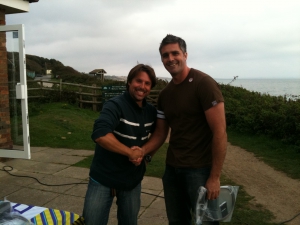 This weekend saw Steve and I travel to Christchurch, Dorset to compete in the BSA Slalom Series – well I say compete, Steve was not competing as he was recovering from a small operation. Christchurch is a picturesck town where the views of the Needles off the Isle Of Wight are lovely. Rigging was easy too on freshly cut grass.
Saturday saw no wind so everyone chilled out, but Sunday saw light winds where big sails and nimble feet were the order of the day. Racing was hard with myself having to pull out due to a broken uphaul (which then completely knackered me out trying to waterstart a 8.5mtr cammed sail in very light winds!
Ant Baker was top of the championship so he was keen for no racing to take place – but this wasn’t to happen. The pro fleet took out their 9.6mtr race sails and 148Ltr boards which were just enough but technique was everything!
Simon Colfield (North/Fanatic) took the lead from the start and romped ahead of the fleet, whilst Ant Baker and Simon Pettifor struggled to get planing and fell down the fleet – NOT what Ant wanted and vigorously argued the race should be abandoned, but to be fair most of the other fleet managed to get down the course. This left Simon Colfield to take the honors (deserved in my opinion) and Ant to wait until Weymouth in October to find out whether he will take the BSA Championship Title for 2011. A very controversial weekends racing but for the spectator it was spectacular!