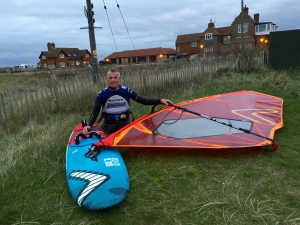 Well, I’m sure any self respecting Severne sailor would by now know of the release of the Severne NuEvo range of windsurf boards. These boards which Ben Severne personally took on from Starboard for 2016 are basically a tuned version of the Starboard signature board ‘The Evo’. When Starboard announced they were dropping the board as a part of their ‘One model range in – one model range out’ policy Ben asked if he could adopt the range and re-tune it to his specifications. And thats exactly what he has done.

The twin fin configuration worked well in waves but Ben felt bigger G10 fins spaced further apart and a little bigger than before keeps the board loose yet gives the board more grip. Made in Wood/Carbon and Carbon/Biax constructions these boards are finished exquisitely – better than any other Cobra factory board I know.

I now have the NuEvo 92 in Wood/Carbon and the NuEvo 86 in Biax/Carbon and have released the first video outlining my thoughts on the range. Lets hope this is just the start of the Severne Range of windsurf boards.