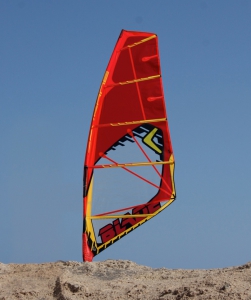 Well, you all know how we bang on about how Severne Sails are the best on the market but its always nice when a truly independent team of testers agree with us. Boardseeker, the UK’s leading test team for all kit windsurfing has found the Severne Blade the Best In Test once again!. I say again because they have rated the Blade as outstanding for the last 4 years.

So rather than me bang on about how good it is just take a read of what they say. 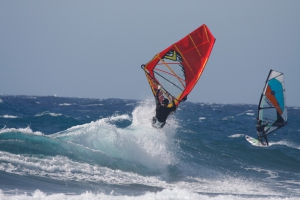 The Severne Blade has been a genuine stand-out wave sail for many years.  It has a lightness in the hands that is unrivalled by any other brand, but also a huge range of performance that puts it near the top of the score cards in anything from onshore, to sideshore and overpowered to underpowered. For 2015, Severne have made material changes to the Blade, but in principle, its performance remains very similar to last year.  However, don’t be fooled by the new ‘Blade Pro’ edition that they have released for 2015 – Kosters signature sail.  Marketing would lead you to believe it’s a performance tweaked version of the standard Blade, however having tried it, it’s quite a different sail altogether.  We still believe the standard Blade tested here is going to be the chosen sail of 95{f61be24ee1963f108502a136e2efcacf7d807c138d3e8d7bbcfb0982c2ecffb4} of riders.  Our whole clone test team preferred the Standard Blade to the Blade Pro, but more on this in a future test!

The Blade is easy to rig.  It’s an all-round quality product with huge attention to detail and you can really tell that the designers have spent a lot of time thinking through even the smallest of details.

That said, there is no visual trim system, but luckily the sail has a very high level of tuning range, so there is some margin for ‘error’.  Overall, the Blade generally worked better with what would comparatively be described as quite a lot of downhaul these days and then tuned mostly on the outhaul.  It’s not a sail that needs a huge amount of outhaul and in most conditions, worked well around neutral or very slight positive outhaul.

It’s one of only three fully five-batten sails within this test, but in our opinion, that’s still a very good thing.  Despite the extra batten, the overall weight is incredibly light and still weighs in at least quarter of a kilo lighter than any other sail in the test.  And that’s a lot!  But most importantly, the weight saving is also very much apparent in the hands when on the water.

The 2015 Blade has an X-Ply window, but it’s one of the most visible windows in the test, which was a real asset when wave riding.

Interestingly, in the 5.0m size, the proportions make the sail higher aspect than the 4.5m version – the difference in proportions between the 2 sizes are actually more apparent than any other sail in test.  This could have been done to make the bigger sails more compact in feel or it may have been done to squeeze the (non-adjustable) luff length of the 4.5m onto a 400cm mast if required.

Either way, the 4.5m has the 2nd longest luff in test (at 402cm), whilst the 5.0m has the 4th shortest luff.  The boom length is also one of the larger within the group.  Despite the subtle proportion differences, we have to say that on the water, the 4.5 and 5.0m retain very much the same characteristics as each other and without examining the measurements in detail these differences would not be apparent. 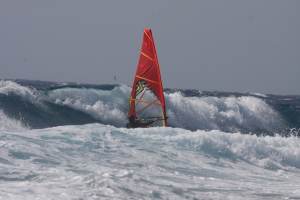 This lighter weight definitely opens up an extra envelope of performance.  At the bottom end, the light feeling helps to un-weight the board and makes the sail feel very light, responsive and efficient to coerce onto the plane.  At the top end, when wave sailing over powered, the lighter weight makes the sail feel very controllable in the hands and definitely encouraged jumps and manoeuvres that wouldn’t have been attempted on less manageable sails. In fact the performance at both ends of the wind spectrum was so good, that the Blade scored as the best performing sail in both bottom end and top end.  Very impressive indeed!

But it’s not all about the weight.  The Blade has a superb balance in the hands.  The pull position is just slightly forward of middle, helping with that light feeling and control.  The power delivery is marginally on the sharper side of middle, which gives the Blade a responsive feel without being too attention seeking and the sail stiffness is right in the middle of this group, which gives a great blend of forgiveness and performance.

The power delivery is in fact fantastic.  At the bottom end, the Blade feels so efficient.  Just one pump on the back arm and the sail instantly feels like it’s pulling the board forward and onto the plane.  In chop, gusts and less comfortable conditions, it’s an extremely balanced sail – you never get surprised by it.  It’s predictable and the power always feels right where you want it.

For jumping, its fast, stable, balanced and light, so again hard to find fault.  We have heard a few murmurings of heavier riders (over 90kg) finding the sail a tiny bit too soft and springy to get serious lift/height on, but we are talking cloud soaring at top-end PWA level here and we doubt any buyers of this sail are going to have any issue what-so-ever.  Quite the opposite in fact.

For wave riding, you might be wondering if it feels ‘old-school’ with 5 battens. We would say not at all.  However the feel of a sail for wave riding is so much down to personal preference, that its hard to pass too much judgement on this.  We can say that the sail has plenty enough flex and ‘give’ in it to hold power through the bottom turn.  The power position keeps everything in control and you just have to watch Scott McKearcher top turning to see what potential the sail has in that department!  Arguably, it’s not as razor sharp responsive as the S1 (which is why Severne offer the S1), but in our opinion, it makes up for this (and more) with its all-round control, comfort, wind range and manners! 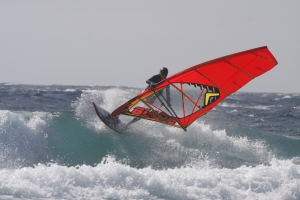 Light in the hands, powerful and yet still so controllable.  Massive wind and user range; equally at home in blast and jump as it is in wobble and ride. Easy to rig and tune.

Who should buy this sail?

If you are considering a new wave sail, you should definitely try a Severne Blade. It is an absolute stand-out product that has been the benchmark of our wave sail tests for the past 4 years.

See the link if you want to for the Full Review