BBC Breakfast Presenter Hangs Out With The Guys…….. 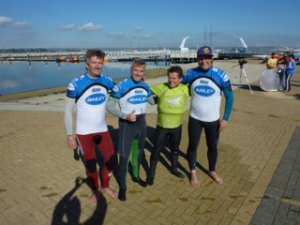 Mike Bushell took time to hang out for a coffee with Team QSW riders when he took a trip to Weymouth Speed Week last week. He was filming for his feature which he tries new sports every Saturday on the BBC Breakfast show which attracts 5 million viewers a week.

He was there to meet Zara Davies who was leaving for Namibia to compete in speed trials with the best speed sailors in the world. She holds the ladies world record for speed windsurfing and was hoping to better her speed this year. We have sadly heard that Zara suffered a major injury which may rule her out for the rest of the event but lets wait and see.