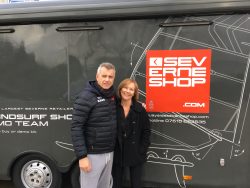 After 9 years of loyal service to The Greentree Group, the company who owned Quayside Windsurfers and owns Severneshop.com Nikki Ford has moved on to pastures new. Nikki joined the company in 2008 as a shop advisor but soon took over the role of managing Quayside windsurfers in 2010 running the online side of the business until its merger and subsequent takeover from Severneshop in 2015.

Neil Greentree (Greentree Group MD) commented ” The reason we have Severneshop.com going global as it has is a direct result of the hard work put in by Nikki the last 7 years. She didn’t sail herself but totally understood the kit and how it worked for different sailors. She will be missed in the company for sure!”

Nikki has gone on to embark in Holiday Letting and all at Severneshop (and across the Greentree Group) wish her well in her new jobrole.