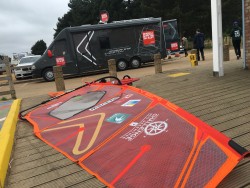 It just seems recently we have been blessed with some awesome May windsurf sessions – The North Norfolk Coast has provided just the best conditions to really put the NEW Range of Severne NuEvo boards through their paces before I release my opinions of this critical new venture from Severne Sails.

Today was just one of those days – Wells provided the back drop on a NNW depression promising 30-35mph winds and a tide which would provide the ramps and waves for us to play on. I got up there early to ensure a parking place for the Severne Bus, rigged my S-1 Pro 4.8 and Severne NuEvo 92 Hybrid twin fin.The conditions didn’t let us down and I had an epic session on both flat water and half mast high swell waves which beg to be jumped and ridden.

Peoples first impressions of it being a Twin Fin is thro-backs of the Twin Fins of years gone by – No grip, super loose, and bloody difficult to sail in anything but waves. Others just label it a re-invention of the 2015 Starboard Evo  just repainted in Severne colours. Well it is a reincarnation of the Evo…yes, but lets get a few things straight. Ben Severne increased the size of the fins allowing for far more grip which feels steady and dependable with no risk of spin-out. It’s a wave board so of course its needs to beared off the wind to get it planing but in Bump & Jump conditions its fast enough in a straight line with good pace. Once on the face it comes alive turned easily yet giving intermediate wave sailors time to think. Come at the wave  from the other direction and every face becomes your next airtime. Get your speed up, aim straight, and BOSH…….Take off, sheet out and you fly into the stratosphere totally in control. No drama, no spinout on landing, and the NuEvo picks up where it left off instantaneously. If you normally would be on a 86Ltr wave board then go one size bigger – the NuEvo feels smaller than it is! 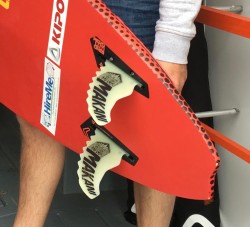 For newcomers to multi fin boards I would recommend the NEW Makani fins we are stocking from Canada. With vortex creating teeth on the leading edge the Paranha fins give you even more grip and upwind ability.

My summary – this really is more than just a wave board. I plan to replace my Fanatic Freewave 96 with the Severne NuEvo 92. Why, well once to adapt to it it can be your Freewave board for all occasions. It’s a board you DON’T need to be a wave sailor – even if you don’t get waves its a board that puts a smile on your face. 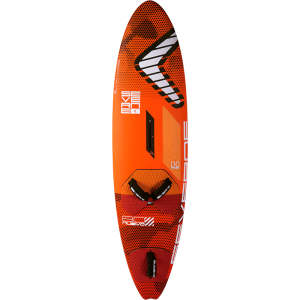 To the sceptics – well you’re the ones losing out. The Severne NuEvo range has changed my perspective on what board I use on a daily basis……. and it might just change yours if you give it a chance!