So for years I’ve wanted to take the long journey to Scotland and the Hebredies to the desolate island of Tiree. They say the sailing is awesome and the water crystal clear but having tried 3 times to no avail I was beginning to wonder if I would ever make it there.

From Norfolk it took 9 hours to Oban and then 3 hours on the ferry out to Tiree – an island I took a day or so to adapt to as its so empty!! With only 900 residents, 1 shop, 2 pubs, and an airport (urhh??), Tiree is most certainly not for the family. But what it is is an island of heaven and hell dimensions which can play out in less than an hour.

The beaches are simply sublime – white sand over crytal seas which have everything from gentle waves to full on epic monsters depending on your beach selection. I chose Gotts bay to begin with going out on my 2020 S-1 5.6 (standard not Pro…..long story!) and Dyno 85. 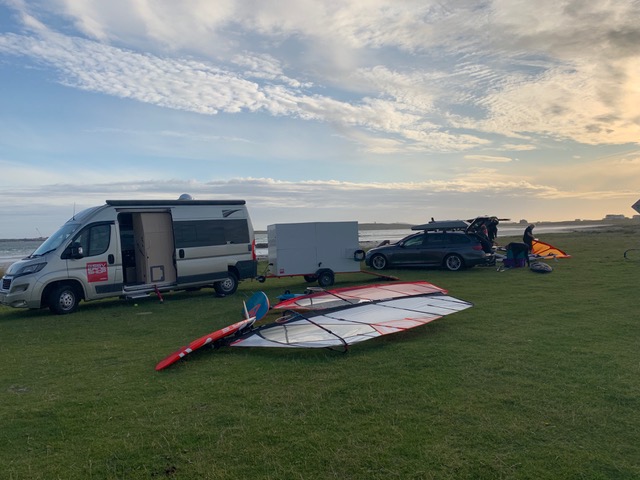 I’m staying in my new motorhome with a trailer  – this is very practical but means i have to stay on the only campsite on the island at Balinoe 10 miles away. Its no biggy but would have been to able to freecamp.

So I’ve had one day with the 2020 S-1’s which feel excellent and light in the hands – lets hope the wind Gods kick in the rest of the week!