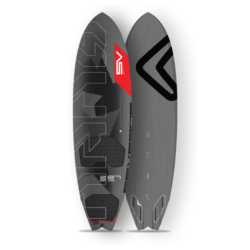 Its well documented that we thought the Severne Nano V2 could have been released in a better fin format than it was – luckily the Uk models came with both thruster fin setup AND the much better Quad fin setup.

So the NEW Severne Nano V3 lands on the market and we wondered have Severne learned their lessons from what we told them on the V2?

Looking at the initial details our expert Neil Greentree says “yeah I think they have!. I can see they have released the new board as a quad which is essential, and that they’ve made the board faster which will improve the allround performance” of the allrounder wave board. theres no doubting that the graphics are incredible (again!!!!!) which will help the board move off the shelves.

We will be getting a Severne Nano 87 Ltr on Demo as soon as they arrive and will be doing a video on this much awaited board.